To me, coincidence is like magic. It makes you see the world in a way that is slightly unreal. Better than real. Like real could be a whole lot better than you think. A good coincidence makes you think, makes you look for the unseen thread that strings a strand of random events together like pearls. Like ghost stories, there’s a time for telling stories of coincidence, and they never seem to lose their magic with the telling.

Recently my wife and I have been talking about the need to encourage my son to write. My wife is a librarian, I’m a writer, so we kind of figure our son should be writing epic novels by the time he’s twelve. That’s a joke. But recently we’ve been looking over our son’s school work and thinking he could use a little more practice writing. Another mom 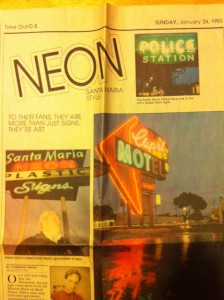 from my son’s class mentioned a small writing group she’d discovered for kids and invited my son to join up. My wife was enthusiastic; I was ambivalent. He’s already got a full schedule, I thought it could wait until summer. Better yet, I could, you know, give him a few assignments myself. Sort of a father-son writing-apprentice bonding thing, which, maybe we’d get to sometime in the summer. The idea faded into the background of busy days.

Tonight, at the end of another busy day, I raced home to take my son to basketball practice. On the way back home from practice as we drove through town–something we’ve done exactly the same way nearly every day for years–this time for whatever reason we started talking about all the neon signs. We noticed all the colors, the lights that were broken, the lights that had been fixed, and eventually my son asked how different neon colors are made. I started to answer, and then remembered back to the very first article I ever wrote about 20 years ago–a newspaper piece on neon signs for the Santa Maria Times. Aha, I thought. A teaching moment on the magic of writing.

For the rest of the drive home, I focused on the setup. Instead of telling my son what I’d learned about neon signs from writing about them for the newspaper, I told him about my first experience getting a job as a writer. I’d just graduated from college with a degree in poetry, and had been unable to find a job in Santa Maria, where I’d moved to live with my girlfriend the librarian. The newspaper was the only gig in town that involved writing but they didn’t have any job openings. So I came up with a plan. I looked through the newspaper and settled on the lifestyle section, and then imagined the most colorful and cool topic I could dream up to report on for a story. Neon signs. I wrote the piece, walked it in to the editor of the Times, and walked on to my first gig as a newspaper writer.

I finished the story as we drove up to the house, and then led my son to the file cabinet in the back of the garage. It took awhile, but I finally found the folder of newspaper clippings, and pulled from it the only copy I still have of that first article on neon signs. While my son got ready for bed, I got lost in the folder of clippings, remembering each of the stories, each of the columns and magazine articles, and finally the obituary I wrote for my father–a lifelong writer and newsman. So much magic I’d forgotten. When I checked in on my son he was lying in bed, reading the story of neon, my wife looking on bemused by the old newspaper clipping. It was a beautiful moment for me to feel smug.

With the hour getting late we hurried my son to finish the story. He held out to the end, and then folded the newspaper for filing away. But as he handed it over he stopped, and then gasped. He pointed at the date. January 24, 1993. The article I’d given him to read, to maybe excite him a little about writing by connecting the dots to our random discussion about neon signs, the first article I’d ever written, was published 19 years before to the day. And then my wife added the punch line. She’d forgotten to tell me, but today was the first day my son had participated in the writing group.

3 thoughts on “Coincidence: When Real is Better than Real”