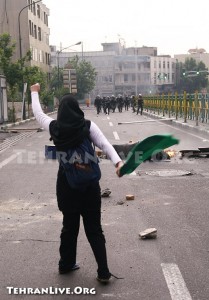 With the events unfolding in Iran over the past few days, there is no shortage of breathless commentary on the role of social media in what some will certainly dub Revolution 2.0. While following these events very closely as a social media advocate, I have to say that I resonate far more with the social story that is emerging than the media story. That’s not to say that the ways we’re seeing sites like Twitter, Flickr, YouTube and Facebook being used to galvanize Iranian protesters and inform the world is not compelling. But this stunning showcase of social technology would not exist without the profound depth of bravery, determination and community shown by so many ordinary Iranians.

Although it’s impossible at this point to know the full impact technology is having on events on the ground in Iran, it’s obvious social media is bringing a far more compelling picture of what’s happening to anyone who wants to witness it, and that alone is revolutionary. While our major news networks perform the ponderous work of compiling and verifying a thin stream of facts according to the traditional time line of the 6am/6pm/10pm news cycle, bloggers and protesters are creating a real-time stream of first hand accounts of events as they happen. The beauty and the danger of this phenomenon is the heightened sense of involvement—that this is not only a domestic political event, but a profound and universal drama in which we all have a stake. By retweeting proxy IPs that Iranians reporting from the street can hop to evade network clampdowns, or joining a Denial of Service attack against the Web sites of the Iranian state, people all over the world are, in a way made possible only by technology, global participants in local events.

But to elevate this fascination with the growing power of social technology misses the most important point. Technology does not provide the passion for tens of thousands of people in Tehran to take to their rooftops and shout down a corrupt government. Technology does not draw hundreds of thousands of housewives, students and shopkeepers into the streets to face down frightening attacks by baton-wielding storm-troopers on motorbikes. Technology does not supply the courage for an unprotected crowd to stand in the face of sniping fire and hold their ground, and it does not provide the compassion of a crowd that protects a captured thug from violent reprisals. A country awash in social media technology is no guarantee of such monumental spirit shown by ordinary men and women in Iran today, resonating with one voice against a government that has failed them. Praising the technology is like celebrating the bullhorn rather than the message it carries.

I suspect when all is said and done we’ll find that as crucial as technology has been as a tactical aid for the early protests in Iran, the greater impact is the way the raw story from the streets became a universal story that vastly enlarged the community of protest, providing validation, and perhaps galvanizing the courage of those standing in the street, while reminding the rest of the world what it looks like to stand up against tyranny. As the Iranian government cracks down more aggressively on the vulnerable tools of social networking, it will be only that fabric of community and purpose that remains to bind them. There is no technology that can replace that.

For the past year or so, I’ve participated in Bill Johnston’s Online Community Roundtables here in the Bay Area. The roundtables are some of the most engaging and informative meetings around. The participants are a blend of corporate marketing practitioners and Web 2.0 experts, anchored by a number of local luminaries and veteran community managers. And I do mean veteran. At least one of the regulars goes back to the early days of The Well.

The style is driven by an ad-hoc agenda: before the roundtable starts, everyone has an opportunity to add a topic to the agenda on a first-come first-heard basis, with no product pitches or proselytizing. Nine out of ten topics are issues with serious depth and discussion, from community management and marketing to platform and technology challenges, and the mix of experience and point-of-view in the room always ensures insightful discussion. I’ve gained far more insight from discussions among practicing community managers than from the experts and luminaries that proliferate and pontificate online.

Next week I’m heading down to Mountain View to participate in the Online Community Unconference–an annual conference version of Bill’s local Roundtables, hosted by Forum One Communications. Just like the roundtables the mix and the open format are conducive to learning from peers who are dealing with the real day-to-day challenges of community development, management and marketing. I’m sure, just like the roundtables, there will be a great mix of marketing managers, veterans and luminaries, and I’m certain the dialog will be the most insightful fare around. Take a look at the session highlights from previous unconferences on Bill’s blog.

I very rarely pitch anything on my blog, but if you’re in the Bay Area and you’re involved in social media marketing, this is an event you shouldn’t miss. Registration is available online. The event is at the Computer History Museum in Mt. View.