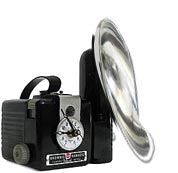 Last week I wrote a short analysis of Kodak’s surprising move with the Zi8 pocket camera, explaining how Kodak had obviously been listening intently to consumer discussions about pocket video cameras, and rather than making the usual incremental upgrade to one or two features for their next release, they threw down the gauntlet and upgraded just about every feature mentioned on user wish lists. This was an unusual move in consumer electronics, where the industry pace for upgrades is typically much slower–a move all the more interesting because it was so obviously enabled by social media monitoring. (How do I know? Because our sister company SocialRep was tracking the same space for Creative Labs, and tracked the same user wish lists in relation to the Vado.)

Jeff Hayzlett, Kodak’s CMO, has been praised and criticized in equal measure for his approach to marketing, which not incidentally includes a big dose of social media. Jeff is an avid user of Twitter and Facebook, and in general a great advocate for social marketing. The fact that he was listening closely to the market is a good thing. The question is, what do you do with what you learn? How does it effect your market strategy?

Last week, I hinted that maybe Kodak has something up its sleeve. Why would a company dramatically accelerate the pace of the product lifecycle? Sure, in the short run, you grab a lead over your competitors and force them to play catch up while you… run ahead. But for that strategy to pay off, you better have some idea of where you plan to run. I had visions in my head of new innovations Kodak might have on deck, from on-device editing tools to face-recognition tagging, or maybe optical zoom and interchangeable lenses. Sure, all in a $200 camera, right? Hey, who would have thought we’d have so much technology in smart phones these days. Well, it turns out I got too far ahead of myself. And maybe Kodak did too.

This week, one of the first hands-on reviews came out from a very influential source. Macworld reviewed the new Zi8, and the verdict was not kind.

Browse through the many pocket camcorder reviews we’ve published and you learn that these camcorders are limited in significant ways—no image stabilization, no exposure or white balance controls, no optical zoom, no support for using external microphones, and no support for 1080p high-definition video. Kodak hasn’t addressed all these limitations with the Zi8, but it does take a shot at some of the most significant—specifically, image stabilization, 1080p shooting, and support for external microphones. Regrettably, none works in stellar fashion or makes up for a camera that’s a fairly average performer.

The review goes on to deconstruct all the areas where the Zi8 falls down, which is a 1-1 list of all the areas the Zi8 was supposed to be jumping ahead of the competition. The best the review could say about the Zi8 is that it “isn’t a terrible pocket camcorder.”

It’s just that in the areas where it differentiates itself from other cameras in this class—1080p video, external audio input, and image stabilization—it doesn’t perform well.

That pretty much throws cold water on the notion that Kodak can run ahead while the competition plays catch up. It also deflates the entire premise of the word-of-mouth excitement Kodak generated when they announced the camera, immediately dubbed by drooling analysts as the “Flip Killer”. The question now is whether or not the bullet-points on the camera box will be enough to sway a large number of customers who don’t know how to Google product reviews.

I don’t know what happened at Kodak, but I can’t help wondering if they let marketing run ahead while production couldn’t keep up. The circumstantial evidence seems to suggest that marketing listened to customer dialog–as well they should–but instead of prioritizing a list of functions they could wrap into the next release at a reasonable level of quality, they got excited by the notion of baking everything into the camera so they could kill the competition. Unfortunately, they didn’t hit the mark, and the result is arguably worse than if they had kept with the strategy of incremental upgrades. The criticism from Macworld is doubly painful because Creative used their production cycle for the next version of the Vado, in part, to vastly improve their support and integration with Macs. Kodak has inadvertently handed Creative a really nice story to tell Mac users when the new Vado is released September 20th.

Not to jump all over Kodak, but there’s another big social media question with regard to Kodak and the Zi8. Kodak made big fanfare of a consumer contest to rename the camera. They got a lot of buzz on Twitter and in the media for the contest–including this breathless review in the Boston Globe. That was weeks ago–an internet eternity. No name has been announced, and the Zi8 is being marketed and sold under the old name they had obviously decided was in need of a change. What’s the deal?

I’ll keep updating on this as the story unfolds. I applaud Kodak for the way they’re pushing traditional boundaries with social media, but there’s obviously still a lot for us all to learn about how social media interacts with market strategy.