Interesting article today from the Sydney Morning Herald about sharing ultrasound images on sites like MySpace. Social networking with a foetal attraction.

“Many mums-to-be say posting ultrasound photos is an easy way to announce an exciting piece of information to lots of people all at once. But some warn that sharing foetal pictures could be oversharing”

I think this discussion is done. Sharing fetal images on the web is widespread and ironically considered less personal than images of children at play. Even my own 20-something daughters agree they’d share ultrasound images of their children but not photos of their first birthday. A good company to look at for this service is MyPhotoBaby. 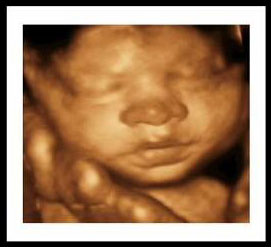 What interests me though is where this is going. For an insight I spoke with Steve Corey, an IT executive working with a group of physicians and ultrasound technicians to deliver 3D and 4D images from the Doctor’s office right to your personal web site — without necessitating a non-medical ultrasound procedure.

Steve sees this as just the beginning; “Right now we are giving families the ability to create keepsakes and get to know their child in utero. But in the near future we see people sharing all sorts of medical imaging”

Where does this lead? You guessed it – MyInnerSpace. It won’t be long before people with serious medical conditions are sharing their MRI’s , X-ray’s and other scans with a non-medical network who have experienced similar ailments.

If doctor’s aren’t already jumping off of rooftops out of frustration with patients who know as much (or more) than they do about their diagnosis – they will now. I predict that patients will be showing up to their appointment with problem areas notated on images they provide. Many doctors have been trained in ultrasound diagnoses by the equipment sales reps – who have no medical degree. It won’t be hard for the determined novice (motivated by a life threatening illness) to become an expert.

Some bad behavior is bound to follow but for the most part, the more we know about our own health the healthier we’ll be.